Giardia in Dogs: Learn to Identify and Treat the Presence of this Common Parasite 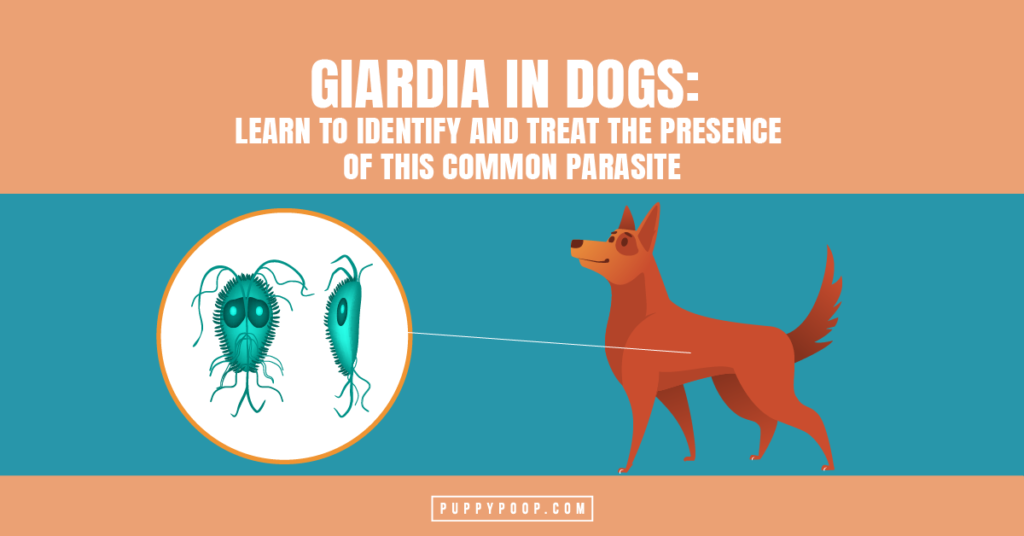 You might not even realize it, but your dog could have giardia! Sorry to break it to you, but even if your dog’s poo is normal, they can still have an intestinal parasite.  Giardia in dogs is especially well-known for this – so let’s take a deep dive into giardia!

Giardia is the most common intestinal parasite in dogs and is even more prevalent in puppies. For example, between 0.44% and 39% of shelter dogs have positive giardia test results. A recent study also found that over 70% of dog parks tested positive for giardia!

It’s difficult to know if your dog has giardia because it’s not a worm, so it’s not visible to the human eye. Giardia is a protozoan, which means it is a single-cell organism like bacteria. It’s different from bacteria because it is larger and contains more cell structures, making it more related to plants and animals.

How Do Dogs Get Giardia?

The life cycle of giardia has two stages: trophozoites and cysts. Trophozoites are mature parasites. These live in the small intestine and multiply to develop into cysts. Cysts, the infective stage, shed in the feces of the infected animal. These little buggers are robust and can survive for several months in the environment! They especially enjoy damp conditions, particularly water sources.

Dogs can become infected by eating or sniffing the cyst stage of the parasite. The cysts may be ingested through fecal-contaminated water or food. It may even spread when dogs groom fur contaminated with feces. Giardia is especially common in doggie daycares, boarding facilities, and dog parks.

If your dog is susceptible to giardia, the cyst will develop into a trophozoite within the intestines. If large numbers are present, damage to the intestines may lead to clinical signs.

Clinical Signs of Giardia in Dogs

Health concerns, especially when a dog has diarrhea, are frustrating. Preparation and information can enable your veterinarian to better help you and your dog. A few things your veterinarian will want to know include any photos of your dog’s diarrhea as well as time and frequency of occurrence.

Although giardia doesn’t always cause problems, when it does, it can lead to serious illness. It affects your pet’s ability to absorb nutrients, water, and electrolytes, which may lead to diarrhea. Puppies, senior dogs, or dogs with weak immune systems are most susceptible to severe infection. In these pets, giardia can lead to severe weight loss and sometimes can be fatal in extreme cases.

Diagnosing and treating Giardia is a challenging feat because cysts aren’t shed in every stool. So, dogs can have giardia-free stool samples even though they are infected. This is because the trophozoites can die off after 30 minutes of defecation. Because giardia is difficult to detect, your vet may ask for fresh stool samples over 5-7 days to confirm giardia infection. The fecal sample should be fresh (not refrigerated) and recently collected to prevent death or distortion of giardia

There are a few tests that can be performed to detect giardia. Giardia is undetectable by standard fecal floats, so zinc sulfate solutions are used instead. Zinc sulfate has a lower specific gravity than the sugar solution used in worm detection. This test allows the heavy giardia cysts to rise to the top for an accurate diagnosis. Your vet may also recommend tests that look for giardia-specific antigens (proteins).

If your dog has diarrhea, it is always best to call your veterinarian. Depending on the severity of your pet’s clinical signs, the veterinarian will likely perform a thorough exam and recommend fecal tests.

There is currently no FDA-approved treatment for giardia treatment in dogs. A common veterinary remedy is the off-label prescription of metronidazole for giardia in dogs for 5-8 days, but this treatment has 50% efficacy. Your veterinarian may also recommend using Drontal Plus® for 3 days or Panacur® for 3-5 days. In more severe cases, your pooch might need fluid therapy if they are dehydrated or have extreme diarrhea.

When giardia cysts are found in the stool of healthy pets without signs of disease, it is often considered a transient finding. Since medications like metronidazole can cause side effects and disrupt the normal gut flora, treatment in these cases can be controversial. Also, more than 65% of dogs that were treated for giardia were still positive after treatment. But, it isn’t known how long giardia antigens survive in feces after treatment. Overall, many vets agree that dogs should not be treated with more than two courses of medication if it is unsuccessful.1

There are options for a more natural approach to treatment, particularly in animals without clinical signs. Probiotics may help by limiting giardia’s ability to attach to the intestines. They also can help stimulate the immune response. There are natural probiotics, like fermented veggies or ready-made supplements. Supplementing with plant flavonoids, like quercetin, have also been noted for anti-giardial activity. Lower fat, higher fiber diets can also help control clinical signs of giardia because they are easily digestible. Higher fiber has also been found to help clear giardia in lab animals so may help in our pets as well.

In older animals or puppies, giardia can lead to fatal diseases, so it should not be left untreated. If your pup needed treatment, they might seem better, but they will require extra tests. Giardia likes to linger sometimes so your vet will want to make sure it has resolved. They may recommend 2-3 fecal float tests 2-4 weeks post-treatment to ensure the treatment worked.

As you can see, there are many options in the diagnosis and treatment of giardia. It may feel overwhelming, so it is important to always discuss these options with your veterinarian to ensure you are making the most informed choice for your pet.

Giardia infections can never be avoided, but there are ways that you can help protect your pup:

If your dog is on a treatment protocol for giardia, we recommend bathing your dog on the last day to reduce the risk of re-infection. Bathing will remove any cysts that remain on their fur.

Can Humans Get Giardia From Dogs?

Giardia can affect people. Although possible, the transfer rate from giardia in dogs to humans is rare.1 Usually, the type of giardia that affects people is A and B, whereas types C and D affect dogs. Yet, there is still a risk for people handling dog’s stool when their dogs are affected. This is especially true for young children, the elderly, and immune-compromised individuals.

Even though the risk is low, washing your hands after picking up your dog’s poop is always a good idea. Wearing gloves while gardening can also help prevent any chance of infection. Environmental hygiene is important. For example, chlorine bleach and quaternary ammonium compounds can effectively kill giardia cysts in your home.

If you are worried your dog may have a parasite, check with your vet about the best next step. We also highly recommend using the DIG Labs Digestive Health Check app to regularly monitor and track your dog’s poop!

Get the DIG Labs App

Download the free DIG Labs Digestive Health Tracker to get personalized insights and recommendations for your dog based on their stool.

Get the DIG Labs App Free

Can I Feed My Dog Rice? My Dog Has Diarrhea

When your dog has diarrhea it can be a scary time and lead to unwanted stress. You may want to… Continue Reading

Is Pepto Bismol® Bad for Dogs? A veterinarian’s perspective

Have you ever heard about Pepto Bismol® or Kaopectate® as a way to treat your dog’s digestive issues? It’s often… Continue Reading

Dog Diarrhea
We use cookies on our website to give you the most relevant experience by remembering your preferences and repeat visits. By clicking “Accept”, you consent to the use of ALL the cookies.
Do not sell my personal information..
Cookie SettingsACCEPT
Manage consent

This website uses cookies to improve your experience while you navigate through the website. Out of these, the cookies that are categorized as necessary are stored on your browser as they are essential for the working of basic functionalities of the website. We also use third-party cookies that help us analyze and understand how you use this website. These cookies will be stored in your browser only with your consent. You also have the option to opt-out of these cookies. But opting out of some of these cookies may affect your browsing experience.
Necessary Always Enabled
Necessary cookies are absolutely essential for the website to function properly. These cookies ensure basic functionalities and security features of the website, anonymously.
Functional
Functional cookies help to perform certain functionalities like sharing the content of the website on social media platforms, collect feedbacks, and other third-party features.
Performance
Performance cookies are used to understand and analyze the key performance indexes of the website which helps in delivering a better user experience for the visitors.
Analytics
Analytical cookies are used to understand how visitors interact with the website. These cookies help provide information on metrics the number of visitors, bounce rate, traffic source, etc.
Advertisement
Advertisement cookies are used to provide visitors with relevant ads and marketing campaigns. These cookies track visitors across websites and collect information to provide customized ads.
Others
Other uncategorized cookies are those that are being analyzed and have not been classified into a category as yet.
SAVE & ACCEPT